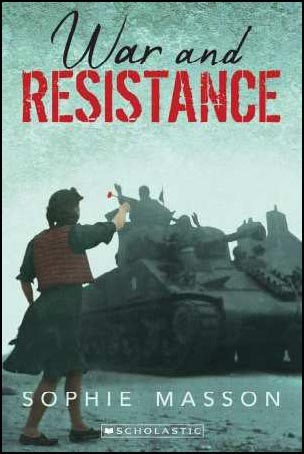 In 1939, 12-year-old Sasha, inspired by the words of her father, the celebrated journalist Louis  Jullian, feels she must find a way to stand up to Nazi terror, in the shadow of a world at war.

Hitler’s blitzkrieg results in the surrender of France and Sasha and her family flee Paris learning first hand the brutality of war and how acts of resistance, no matter how small, can make a difference. In their occupied country, fraternising with the enemy is frowned upon, but necessary. It only gets more complicated when she meets Dieter, a member of the Hitler Youth movement and the son of her father’s best friend. How can Sasha know who to trust when the enemy becomes a friend?

Starting with the Nazi uprising and spanning all of WWII, War and Resistance traces the journey and impact of war on two families and in particular two teenagers, Dieter and Sasha.

Dieter is a young German member of the Hitler Youth movement. He wants to be a warrior and show courage for the Fatherland - not like his spineless stepfather who pretends to support just so that he can get an easy ride.

Sasha is the daughter of a journalist turned war correspondent, who has travelled widely, living in Australia and then Paris. But when the Nazis occupied Paris, her family fled to Biarritz in the south of France.

Dieter’s father received a posting to Biarritz as an interpreter, and so their paths cross. That Sasha’s parents were great friends with Dieter’s real father adds intrigue, as the families mixed and socialized, but was this just to spy on the enemy?

Sasha has always wanted to do her part for the resistance  -  anything that could make a difference. This is never graphic, but more looks at the effects war has on families, and how a somewhat normal life can exist in an occupied zone. We see a different look at the psychology of war.

I find that Sophie Masson’s best works deal with characters that are realistic, but set in a historical context and exploring the effect of the historical situation on the real lives of people. War and Resistance is no exception, and would make a wonderful group read for Year 5 to Year 8 classes.

A fantastic middle grade novel with themes of family, friendship and trust in a war time setting.