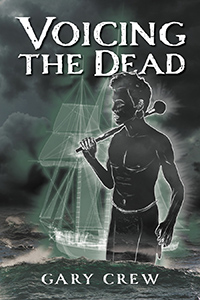 See me. Touch me. Others have, and tasted my blood...' So writes Jack Ireland, 14 year old English born survivor of the horrors of capture by head hunters.

In Voicing the Dead, internationally-awarded author Gary Crew revisits the astonishing story of nineteenth century teenager Jack Ireland who survived - and lived to fight back through his 'never say die' determination and creativity.

Gary Crew has based this book on the true story of Jack Ireland who was a survivor of a shipwreck on the Queensland coast in the early 1880’s.

Told from Jack Ireland’s perspective as if he was still alive many, many years after the event, those who enjoy historical fiction will love this book.

Jack believes he has ink as well as blood in his veins so he frequently ‘takes lit trips’ as he calls them, into other books. So much historical literature is quoted throughout the story.

It is quite violent at times, as most of the crew are killed by head-hunters.

Probably best suited to boys Year 8 and up who like adventure in their historical fiction.