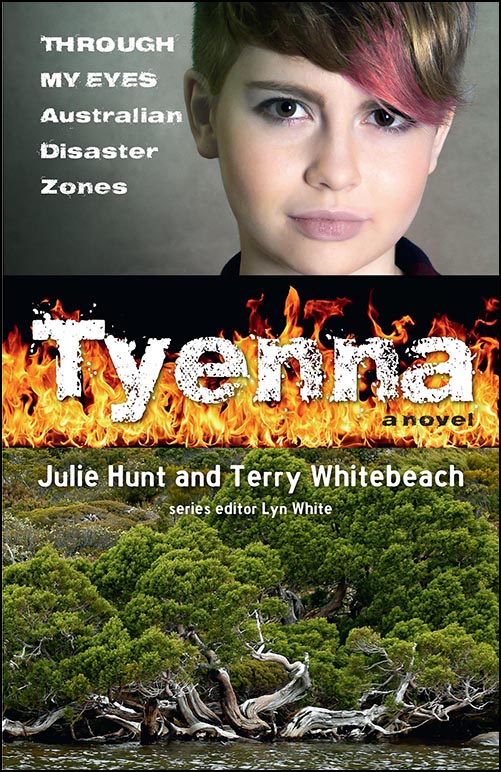 An engaging and suspenseful novel about one girl's experience of the terrifying Tasmanian bushfires.

They huddle low, nostrils burning from the smoke. A wave of despair flows over Tye. Nothing will survive this firestorm. The bush and everything she loves will be lost.

It's the summer holidays, and Tye is staying at her grandparents' lodge at Chancy's Point in Tasmania's beautiful Central Highlands. But her plans for fun with best friend Lily and working on her pencil pine conservation project are thwarted as fire threatens the community and the bush she loves - and when Tye discovers Bailey, a runaway boy hiding out, she is torn between secretly helping him and her loyalty to her grandparents.

As the fire comes closer and evacuation warnings abound, Tye is caught up in the battle of her life. Will she and Bailey survive? What will happen to her beloved pencil pines and the wildlife at risk? Can she and the close-knit Tasmanian community make a difference in a world threatened by climate change?

Tye loves spending the holidays with her grandparents, in the beautiful wilderness of Chancy's Point in Tasmania. She has a somewhat strained relationship with her Mum, and loves the lifestyle that bushland Tasmania offers, compared to her hometown of Melbourne.

She feels connected to the land and her surroundings, her Nan and Pop, the community and friends she has there, particularly her best friend Lily, and she takes a strong interest in the conservation projects that are all around them.

All of this is suddenly under threat though, as Tye finds herself in the midst of the worst fire season the area has ever seen. But Tye and Lily have also been keeping a secret from her Nan and Pop, who are now caught up in the battle to contain the fire that threatens them all. They have been helping a runaway boy, and now his life, and theirs, are in danger and they don’t know what to do.

It is going to take all their courage, resilience and determination for them all to survive.

This is a wonderful story of friendship, family, and community coming together during a bushfire emergency. It raises discussion topics around bush conservation and climate change, and will be thoroughly enjoyed by all students in Years 5—8.