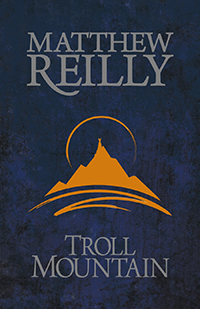 A young hero. Barbaric monsters. An impossible quest. In a remote valley, a tribe of humans is being killed off by a terrible disease.

There is a rumour that the trolls of Troll Mountain have a cure for the illness: a miraculous elixir. When Raf's sister gets sick and his tribal leaders refuse to help him, he makes a courageous decision.

He sets out on his own for Troll Mountain ... to steal the elixir.

The journey to the mountain has begun ...

This is a very different story than usual for Matthew Reilly. It is more fable than his usual action adventures, but it does still have wonderful action scenes as we follow our hero Raf into the stronghold of the Troll King to find a magic elixir to help his sister get well.

Along the way he makes friends with Ko, a hermit, and Dum, a troll, whose life he saves.

Together the three friends must find a way to help save Raf’s sister. Along the way they learn that brute strength is no match for intelligence, courage, honesty and friendship.

I thoroughly enjoyed this book and it is very easy to read and fast-paced.

While it has lots of adventure and action, like any good fable there is a moral to the story as well.

Perfect for Year 7 and up.