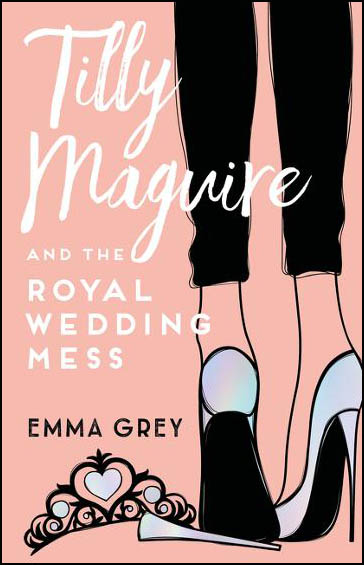 Aspiring writer, 18-year-old Tilly Maguire, is a totally reformed ex-superfan of British boyband singer, Reuben Vaughan. Yeah, she was going to marry him when she was thirteen, but that fangirl phase is way in her past now, along with an unfortunate side ponytail and a weird obsession with galaxy leggings - ugh. Cringe! When her writing wins Tilly a six-week internship at a top London PR firm, she doesn't expect to stumble from a long-haul flight straight into an A-list debacle of her own making, but these things happen. She proves to the entire world that jet lag and social media definitely don't mix.

Obviously, Tilly didn't intend to get tangled in a ridiculous scandal involving the British royal family. She's not the attention-seeking type! She's just a socially awkward introvert, with a galloping case of anxiety made even worse after a high-profile run-in with the very last person she ever imagined she'd meet for real. Not on her gap year, anyway. And not like this!

Tilly arrives in London to do a six week internship at a large PR firm. And although being exhausted is no excuse, she sets the world humming with a post on the company’s official site that mega star boy band member Reuben Vaughan, who is represented by her firm, and Princess Isabella (Belle) are really close, as in maybe an engagement is on the cards kind of close… Unfortunately for Tilly this is a total faux pas!

Tilly seemed to miss the fact that Reuben only had eyes for her at the ball, but this quickly changes when he takes her to the band’s secret country retreat to hide.

We then have a roller coaster of emotions and interactions between Reuben, Tilly, Belle and Reuben’s PA Angie, who grew up with Reuben and Belle.

I don’t want to reveal too much - but the story involves chivalry, a Royal Family scandal, a Royal wedding—nearly—and a clear message to stay real and be the person you are meant to be in this world.

It is easy to get taken along with this novel, as it is full of twists and turns and has enough romance and positive messages that I would definitely recommend it to girls aged 13-16.