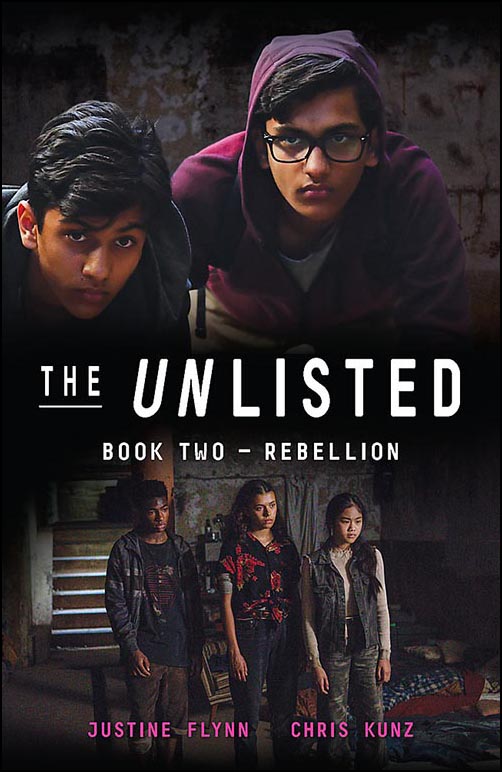 Twins Dru and Kal Sharma must work together with a group of underground vigilante teens to stop a sinister organisation from controlling the world's youth population, in this exciting new ABC/Netflix TV tie-in series.

Resistance will not be tolerated.

The Unlisted are running out of time. With Infinity Group closing in on the vigilante teenagers, it's up to twins Dru and Kal Sharma to infiltrate the headquarters of the sinister corporation to try to uncover what they are planning.

Rebel groups of Unlisted are emerging across the globe, ready to rise up. But Infinity Group is one step ahead, and they have an army of teens under their influence. The Unlisted are in more danger than ever, and help will arrive from the strangest places.

Things are really starting to heat up for the Sharma twins in this next instalment of The Unlisted, as they try to find out once and for all what is really going on at the Infinity Group’s headquarters.

The Infinity Group seem to be exerting more and more power over the students at school, and it is getting increasingly difficult for Dru and Kal to keep the fact that Dru is ‘unlisted’ a secret. On top of that, the power that they have over Kal’s mind is becoming an ever increasing worry to Dru. How long will it be before Kal loses control over his own thoughts and actions completely?

Their fellow ‘unlisted’, who have been living in the tunnels of Sydney, are also under increasing pressure and are struggling to survive. How much longer can they continue to hide from the Infinity Group? And even though they are now uncovering more ‘unlisted’ around the world, the degree to which the Infinity Group will go to control them all is escalating too.

This is a wonderful action-packed, fast-paced series that is a fantastic read for all teenagers.