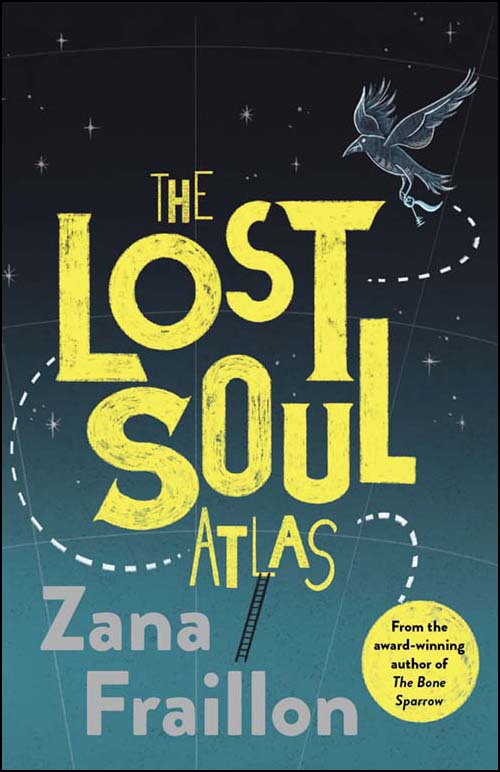 Loyalty is tested, and a cruel twist of fate leads to an act of ultimate betrayal in this epic story that spans a city, a decade, and the divide between life and death itself. Twig is all alone after his dad goes missing. But when he meets Flea, a cheerful pickpocket, the pair become fast friends. Together, Twig and Flea raise themselves on the crime-ridden streets, taking what they need and giving the rest to the even-poorer.

Life is good, as long as they have each other. But then Twig wakes up in the Afterlife. With just a handful of vague memories, a key, a raven, and a mysterious atlas to guide him, he tries to piece together what happened, and to find his way home…

A powerful story of hope and friendship from the award-winning author of The Bone Sparrow.

Twig awakens in the Afterlife, with a bossy raven to guide him and a whole bunch of partial, vague memories.

What is he supposed to do now? Where is his Da, and who is Flea? How does the mysterious atlas that the Gatherer gives him help? And, most importantly, can Twig somehow figure out how to put his life back together and find his way home?

It is clear that Twig’s life has been hard, fending for himself on the streets, but his is a story of friendship, hope, resilience, memories and love, all entwined in a fantasy story that switches be-tween Twig’s memories from his life, and what he is now facing in the Afterlife. You will love the determination and humour of the characters, especially Twig and Flea.

With the added layer of the puzzle of the Atlas of Lost Souls to solve as well, this is a wonderful, thoroughly enjoyable, adventurous fantasy story from Zana Fraillon, that will not disappoint her many fans, and is best suited to readers in lower secondary and above.