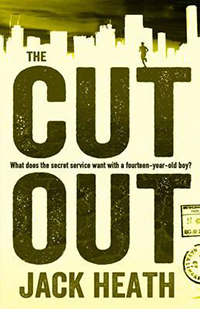 Fero isn't a spy. But he looks exactly like someone who is: Troy Maschenov - a ruthless enemy agent. But what starts as a case of mistaken identity quickly turns into a complicated and dangerous plan. Fero is recruited to fight for his country.

He will have to impersonate Troy, enter enemy territory, hunt down a missing agent and bring her home in time to prevent a devastating terror attack. Fero is in way over his head. Hastily trained, loaded up with gadgets and smuggled across the border, he discovers the truth about espionage.

Getting in is easy.

Getting out alive is hard.

When teenager Fero is taken in by the government to retrieve one of their agents over the border in enemy territory, he obviously wonders, why me?

The answer lies in his doppelganger - who is an imprisoned enemy spy.

What follows is an amazing Matthew Reilly style of action thriller. Filled with incredible gadgets and fantastic pursuits, will Fero prove to be up to the enormous task set for him?

Can Fero prevent the deadly terrorist attack that has been promised or will his country be decimated?

Altogether a great adventure that will be most appreciated by 10 - 14 year old action fans.