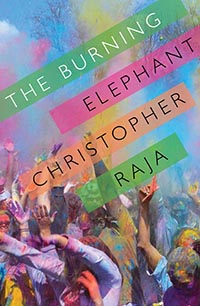 The Burning Elephant is set in Kolkata before and after the assassination of Indira Gandhi, which led to widespread violence against India’s Sikh population.

The novel is told from the point of view of a young boy Govinda, whose father is the headmaster of a local school. It begins with the intrusion into the schoolyard of an elephant that has escaped from its owner, and is seen as such a danger that he is immediately shot, then burnt by the police.

This outbreak of violence in the idyllic world of childhood sets the tone for the novel as a whole, which gives the innocent yet knowing perspectives of Govinda in his engagement with the crowded and complex life of Serpent Lane outside the school, his awareness of the breakdown of the relationship between his parents, his sense that his own privileged life is under threat.

The way the tensions in his family are rendered against the backdrop of the larger social tensions in India, while at the same time maintaining Govinda’s child-like point of view, is particularly compelling.

It is the outbreak of violence after Indira Gandhi’s death which finally causes Govinda’s father to migrate to Australia and it is the implicit lesson of this novel, never spelt out, but felt throughout, that such horror is often a central fact of migration to this country.

This is the first book that I have read on the migration of Indian people to Australia, and the central theme revolves around the reasons why people might want to leave their homeland to migrate elsewhere.

The reader sees India through the eyes of Govinda, a young boy and son of the local school headmaster, in the time leading up to the assassination of Indira Ghandi.

We see up close the threat to his family’s wellbeing and their privileged lifestyle that the social upheaval occurring around them brings.

I was captivated by Govinda’s story and his personal journey against such a compelling backdrop.

The author, Christopher Raja, migrated to Australia from Kolkata in 1986 and currently works in Alice Springs. The Burning Elephant is his first novel and I applaud him for such an enthralling debut.

This is an accessible read, that will suit all secondary school students.