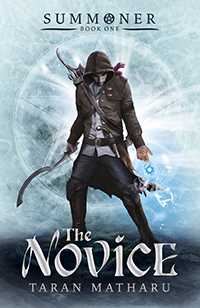 Fletcher was nothing more than a humble blacksmith's apprentice, when a chance encounter leads to the discovery that he has the ability to summon demons from another world. Chased from his village for a crime he did not commit, he must travel with his demon to the Vocans Academy, where the gifted are trained in the art of summoning.

The Vocan Academy will put Fletcher through a gauntlet of gruelling lessons, training him as a battlemage to fight in the Hominum Empire's war against the savage orcs. Rubbing shoulders with the children of the most powerful nobles in the land, Fletcher must tread carefully.

The power hungry Forsyth twins lurk in the shadows, plotting to further their family's interests. Then there is Sylva, an elf who will do anything she can to forge an alliance between her people and Hominum, even if it means betraying her friends. Othello is the first ever dwarf at the academy, and his people have long been oppressed by Hominum's rulers, which provokes tension amongst those he studies alongside.

Fletcher will find himself caught in the middle of powerful forces, with nothing but his demon Ignatius to help him. As the pieces on the board manoeuvre for supremacy, Fletcher must decide where his loyalties lie. The fate of an empire is in his hands ...

Fantasy and magic lovers are going to love this one!

After being left at the gates of the city of Pelt as a new born baby, Fletcher was raised by a blacksmith who took him in.

His life changes completely when he meets a soldier who leaves him with an old book. But this is not any ordinary book! From it Fletcher learns the art of summoning a demon—and this is exactly what he does.

After being run out of Pelt by the powerful nobles, he find himself at an academy for those with this special summoning gift, to enhance their magical powers. The academy is now no longer just for the nobles. Commoners, elves and dwarfs are all now accepted there too, as the Hominum Empire’s war against the Orcs is intensifying.

The mixture of students now at the Vocans Academy creates great tension and danger. Who can Fletcher trust?

From the very beginning I loved Fletcher’s character. He has been up against things his whole life, as the powerful and privileged have bullied him and made his life difficult. He is the sort of person that you just want to succeed and you want to see win.

The next instalment is bound to be eagerly awaited by fantasy lovers 14+.