Rise of the Remarkables 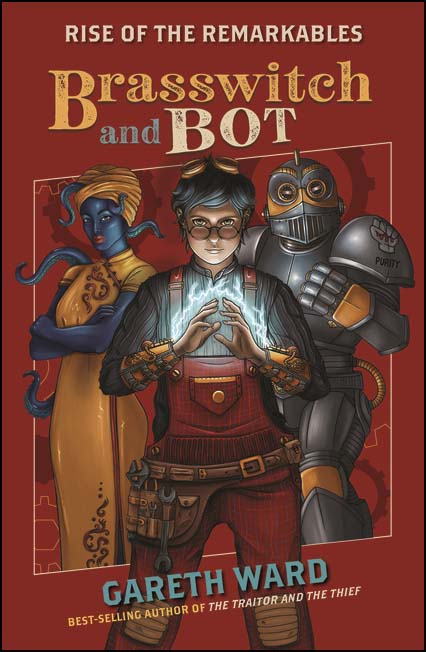 Drawn into a world of prejudice, deceit and danger, Wrench must master her powers, knowing they offer her only hope for survival… if they don't destroy the world first. Screams surge along York's narrow Victorian streets as a run-away crackle-tram races toward disaster. Fearing an accident like the one that killed her parents, Brasswitch Wrench is forced to reveal her powers – a decision that will change her life forever.

Recruited to the sinister department of Regulators who hunt down others like her, Wrench teams up with their maverick mechanical leader, Bot, as they are tasked with halting the rise of the aberration threat. Until today, being called Brasswitch would have got you killed. Now, it might save your life.

Set in a Victorian-era post industrial revolution world, this is a pacy steampunk novel. Twelve-year-old Wren (aka Wrench) is an apprentice engineer at the steam train works when she is taken by a regulator and tortured. Regulators are those empowered to keep society free of aberrations and witchery.

She is saved by a huge mechanoid named Bot, who is in charge of an elite team of regulators. But being saved really means that she must hone her skills and be the group’s brasswitch. This is a person who can stop, alter, break into or destroy any mechanical object. The real purpose is to save society from the upcoming Rupture that will see all kinds of aberrations, remarkables and old gods enter (and probably destroy) the world. This rupture is due to occur on Wren’s 14th birthday with the alignment of the planets. But this is only a few weeks from now, and many evils stand in the way of victory!

For lovers of steampunk, this is one of the best novels I have read. It contains nothing that would prevent a younger reader from enjoying it, but I believe the real audience is those 11 - 14 years old.