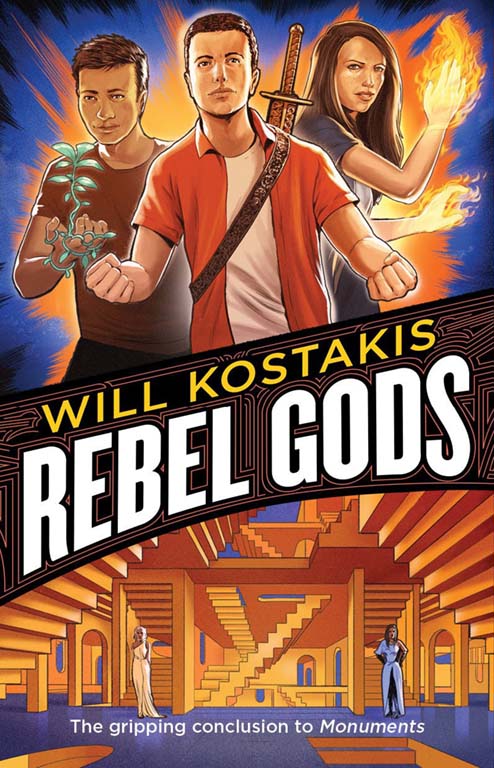 With the Monuments gone, newbie gods Connor, Sally and Locky must stop the rebel gods from reducing the world to ruin. Trouble is, they don't know how. While Sally searches for answers and Locky makes plans to change the world, Connor struggles to keep up appearances as an ordinary teenager. But when a rebel god offers them a deal to end the chaos, their lives are turned upside down and they're forced to reckon with the question: who should decide the fate of the world?

Rebel Gods is the is the gripping conclusion to Monuments, a Children's Book Council of Australia Notable Book 2019, from YA superstar, Will Kostakis. It's a heartfelt look at family, friendship and the parallel lives we lead.

Connor, Sally and Locky are back for another adventure…

Whilst this is the second and final book in the Monuments story, you can definitely read it as stand-alone story too, as Will Kostakis has done a great job with the summary of the previous tale at the beginning of this one. Although Monuments is also an excellent book, so I would recommend you do read it if you have the chance!

Our three new gods are struggling with their new roles and normality, when a rebel god shows up. The Monuments had left them a message that the rebel gods would ruin the world and must be killed immediately. Can our new gods save the world? And are the rebel gods really that bad?

Fast-paced and filled with humour, friendship, love and action, this is an enthralling tale.

Perfect for those who like their fantasy stories grounded in reality, will most suit readers in Year 9 and above.