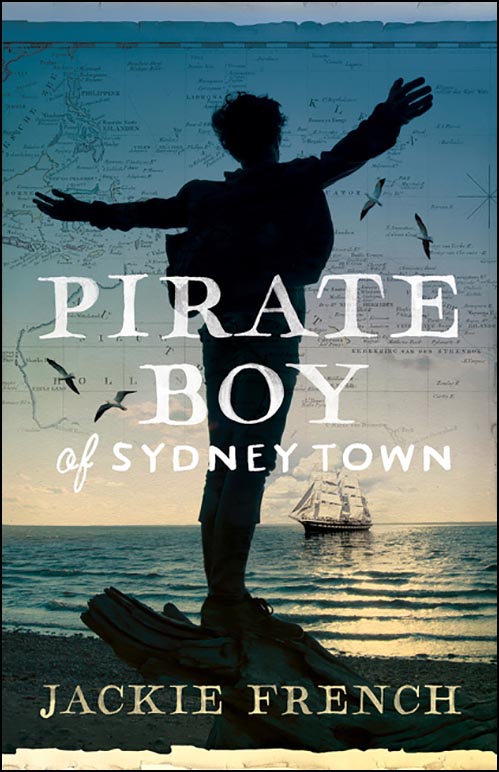 Twelve-year-old Ben Huntsmore is the son of a shipowner, an only child who loves the farming life on his mother's family estate, Badger's Hill. But when Ben's father loses their ancestral home in 1809 as payment for a gambling debt, Ben reluctantly joins him in a desperate venture to win it back, capturing enemy trading ships off the west Australian coast.

While at sea, Ben must face not just the giant waves of the Southern Ocean but also the guns of a Dutch ship, along with unexpected treachery. And only the friendships of the mysterious convict Higgins and the young Indigenous sailor Guwara will help Ben survive, as well as show him the true meaning of loyalty and riches.

From renowned children's author Jackie French comes a book filled with swashbuckling adventures and which uncovers Australia's hidden history as a pirate port and slavers' den.

Set in the early 1800’s, Pirate Boy is a 12-year-old English Lord called Ben Huntsmore. His rogue father has lost the family estate to gambling and decides to take Ben to Australia aboard a ship transporting convicts.

Not many survived the journey as payment was made for those taken, not for those delivered safely.

The real action for Ben begins once they arrive in Australia. Ben leaves Sydney with his father captaining a boat with a mean crew, under the guise of defending England, but with the real intention of raiding Dutch ships off the west coast of Australia. After a successful, bloody attack, the crew mutinies, killing Ben’s father. Ben is saved by a convict named Higgins and an Indigenous man named Guwara.

There follows an amazing story of survival as the three of them travel together on a small boat along the south coast of Australia, making their way back to Botany Bay.

Guwara uses all of his indigenous skills to find water, catch food and keep these three alive, and teaches Ben so much along the way.

I won’t reveal the end, but can say that this was a terrific middle years novel, ideal for shared reading. It is filled with action, tyranny, survival and friendship, and we get a great look into life in Australia in those early years. With cameo appearances by Nanberry and Tom Appleby, Pirate Boy fits nicely into that same Year 5 - 8 age range.