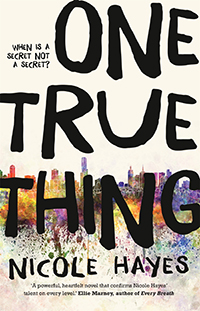 When is a secret not a secret? When your whole life is public. Frankie is used to being a politician's daughter, but with her mum now running for Premier, life's a whole lot crazier than usual.

All Frankie wants is to lose herself in her music. So when her best friend, Kessie, invites a student journo to interview the band, Frankie is less than thrilled. But Jake's easy to talk to, and he seems to really like Frankie.

That doesn't stop her from wondering if he's just after the ultimate scoop, especially when photos surface of Frankie's mum having a secret rendezvous with a younger man.

With her family falling apart around her, Frankie is determined to find out the truth - even if it means losing Jake.

Being a bit older and having been actively involved in elections, I could feel for the characters in this book.

While politics won’t be all teenagers ideal setting, this book deals with so many more issues, particularly the consequences of peoples actions.

Should we invade the lives of politicians families? Should truth be uppermost in journalism?

But this story is also a whole lot more. Frankie, the Premiers daughter, is the leader of a band. She falls in love with budding photographer, Jake, but feels betrayed when photos of her Mum and a mystery man appear in the press after Jake took the shots.

Her relationship with Kessie, her best friend is in danger after Kessie falls for fellow band member Tyler.

Her family life is being torn apart following the revelations of a secret from her mothers past.

Can Frankie find happiness through all this upheaval?

I found this a thoroughly enjoyable, contemporary read that should be read by 15+ teenagers.