My Family for the War 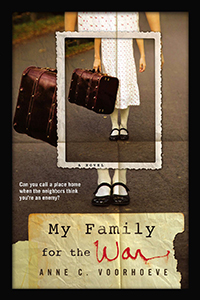 At the start of World War II, ten-year-old Franziska Mangold is torn from her family when she boards the kindertransport in Berlin, the train that secretly took nearly 10,000 children out of Nazi territory to safety in England. Taken in by strangers who soon become more like family than her real parents, Frances (as she is now known) courageously pieces together a new life for herself because she doesn't know when or if she'll see her true family again.

Against the backdrop of war-torn London, Frances struggles with questions of identity, family, and love, and these experiences shape her into a dauntless, charming young woman.

Set in Germany and then England, this is a story of Ziska Mangold, known as Frances by her new family in England. When Hitler starts rounding up Jewish families, Ziska’s mother puts her in a kindertransport to England in the hope that they will meet there later.

The Shepherd’s take in Frances to look after her for the duration of the war. The story follows their lives during the Blitz of London, the long years of hardship that followed, right through to the end of the war and after.

I found this book incredibly hard to put down as the struggles of so many people is told through characters that are so easy to relate to. Frances has to grow up very quickly and she struggles with her feeling of guilt over her Mum as she bonds so closely with her foster family.

It is a story of friendship, courage, hardship and determination, but mostly it is a story of identity and love. A wonderful new addition to the many books written about World War II. This one will become a classroom favourite. Perfect for Year 8 and up.