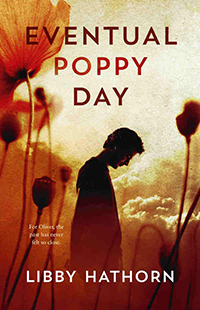 Painstakingly researched and extremely well written, this is a novel that moves deftly and easily from one time period to another and yet still allows the novel to retain an overall sense of cohesion.

Respected YA author Libby Hathorn has drawn on family history and done extensive research to write a fascinating book that profiles two young protagonists, both seventeen years of age, who are related: Maurice, who went to Gallipoli and the Western Front and his great-great nephew, Oliver, who is trying to deal with difficult family circumstances but whose discovery of Maurice's WW1 diary changes the way he sees the world.

The balance of the historical and contemporary points of view makes this title perfect for use in the classroom, but also appealing to the YA reader.

We see the horror of World War I from Gallipoli through to Flanders Fields, where Libby’s own uncle Maurice spent three years fighting, only to eventually die in Flanders Fields.

This ties in with Oliver, who lives with his great Aunt Dorothia. Dorothia is Maurice’s youngest sister, and was born shortly after Maurice’s death.

At first Oliver cannot understand our need to remember the war. Then, when he is at his lowest and in a great deal of trouble with Dorothia, she gives him special letters written by his great uncle Maurice. Oliver is touched by these letters, especially the one to his unborn sister, Dorothia.

Maurice and Oliver’s connection is made stronger by their love of drawing and painting.

Exploring the effects of war, including the connections between families and the long term impact war can have on a family group. An important and interesting exploration of the ties between things that happened in the increasingly distant past and life today.