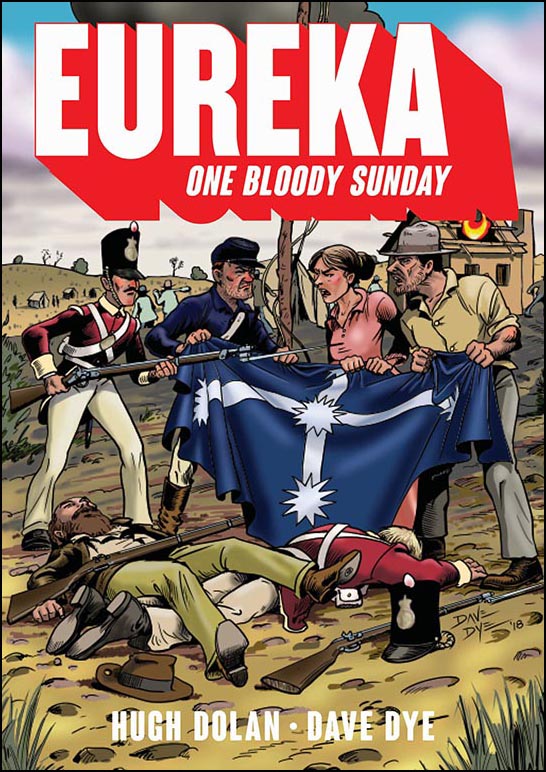 This graphic book brings to life the struggles of daily life on the goldfields and the powerful events of the     Eureka stockade. The extraordinary story of Eureka is one that Australians have revisited since it happened in 1854. Why did British Army Red Coats fire on a group of miners hidden behind a crude wooden stockade?

Why did soldiers from two famous British regiments attack a group of gold miners early one Sunday morning? What made the miners and their families protest and put their lives in danger? This book brings alive life on the Victorian goldfields. It tells us about power, settlement and the growth of the colony. It tells us about rights, and what matters.

The central character in this book is a boy called Bernie. Bernie lived with his parents on the goldfields and played a key role in events leading up to the battle at the Eureka Stockade, despite his age. He sees the murder of the miner that sparked armed protest. His family were camped close by and were key    witnesses. We see the growing unrest and the fighting through his eyes.

The reader is challenged to investigate  -  like a detective, you must sift through different accounts and reach your own understanding. People on both sides of the conflict believed that their actions were correct and justifiable. Readers will see actual letters from the governor, complaints from angry miners, as well as diaries and newspaper articles. This is not a book you can read while watching television. It’s so gripping you won’t want to.

This is a graphic novel format exploring the events that took place before, during and after the Eureka Stockade - and it is a great and interesting way to get an insight into this time in Australia’s history.

Although focusing on the story of Bernie, Eureka One Bloody Sunday also allows the reader to analyse and form their own opinions about what happened, and how just or unjust each side was, by showing the different sides to the conflict. The inclusion of diaries and newspaper articles add a very real perspective to the story.

It can be used as a great introduction to this topic, and Australian history in general, and will encourage readers to find out more about how these events shaped our country.

Being a graphic novel, this format makes the topic accessible to some more reluctant readers, but it is suited to all secondary readers, as well as upper primary readers.