Empire of the Waves 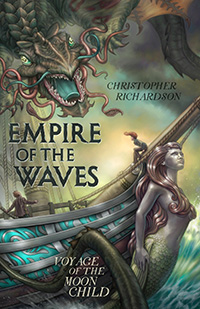 Pel Narine is on the edge of war, and Anni Tidechild's world is on the brink of change. Uncertain about her past and fearful of the future, Anni lives a life of evasion; avoiding both her guardian, Wavelord Filip Able, and the voice that calls to her from the sea.

When she meets Duck Knifetooth, the new friends are catapulted into unforeseen danger: pirates, the last giant, a mysterious ship and ancient creatures of the deep.

It was a message to the Tidechild from the Pool of Fire in the Deep. Just five words ...

We are waiting for you.

From an exciting new voice comes the first book in a thrilling series - an epic seafaring quest for truth and freedom.

This is a rollicking fantasy adventure that has wonderful characters and an intricately woven plot.

Anni Tidechild is an orphan being raised by Sister Ignatia in the floating city of Pel Narine.

Anni’s world is constantly at war with the pirate clans, but when she meets Theodore the giant and Duck the son of a high ranking captain, everything they believed to be true is now being questioned.

Can two small children, a giant, some wibbens (like dwarves) and swashbuckling pirates change the fate of their world?

Highly entertaining, will be enjoyed by lower secondary students with a taste for fantasy.

Empire of the Waves has me eagerly awaiting the next instalment of Anni and Duck’s adventures.