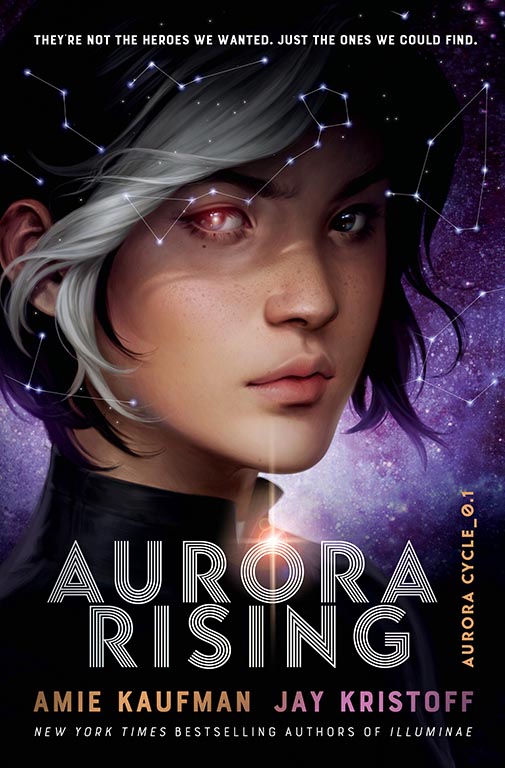 From the New York Times and internationally bestselling authors of The Illuminae Files comes a new science fiction epic… The year is 2380, and the graduating cadets of Aurora Academy are being assigned their first  missions. Star pupil Tyler Jones is ready to recruit the squad of his dreams, but his own boneheaded heroism sees him stuck with the dregs nobody else in the Academy would touch:

A cocky diplomat with a black belt in sarcasm
A sociopath scientist with a fondness for shooting her bunkmates
A smart-ass tech-whiz with the galaxy's biggest chip on his shoulder
An alien warrior with anger management issues
A tomboy pilot who's totally not into him, in case you were wondering.

And Ty's squad isn't even his biggest problem  -  that'd be Aurora Jie-Lin O'Malley, the girl he's just rescued from interdimensional space. Trapped in cryo-sleep for two centuries, Auri is a girl out of time and out of her depth. But she could be the catalyst that starts a war millions of years in the making, and Tyler's squad of   losers, discipline-cases and misfits might just be the last hope for the entire galaxy. NOBODY PANIC.

This is YA sci-fi at its best!

The basis of the story is that the golden boy of Aurora academy, Tyler Jones, is about to graduate dux. He gets to choose his team to fight for the good of the universe (think intergalactic peace-keepers) in the year 2380.

Tyler opts for a mind clearing joy ride the night before his graduation and comes across a space ship from Earth that has been lost for 200 years. There is only one survivor, a girl called Aurora who has been in a cryo-pad for 200 years. Obviously Tyler just has to save her!

He misses his graduation and in his new team Tyler is lumped with whoever is left - not quite the stellar squad he was anticipating! Thrown together on a seemingly innocuous mission, the team finds Aurora aboard and everything suddenly gets a whole lot scarier.  Are they up to the challenge?

Tyler’s team is made up of a wonderful mix of aliens from various galaxies that have all vowed to defend peace - and the characters in his team are really the highlight of the story. I highly recommend this novel to anyone, teenage or older. I can’t wait for the sequel.