Anything That Isn’t This 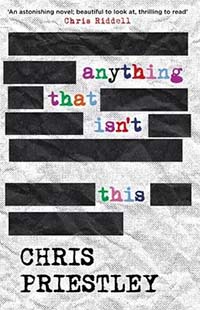 Seventeen-year-old Frank Palp lives in a grim little apartment, in a grim little building, in an exceedingly grim (and rather large) city. Cobbled streets and near-destroyed bridges and war-damaged houses stand alongside post-war, characterless, concrete hutches. Frank generally hates his life and the idiots he's surrounded by... and yet he is in love.

A love so pure and sparkling and colourful, Frank feels sure it is 'meant to be.' He believes his love is a reward for all the terrible grey that he is surrounded by - which would be great, if only the girl in question knew he existed. And then one day he finds a message, in a bottle. A wish, for 'anything that isn't this.'

He believes the girl who wrote this is surely his soul mate—and now he just needs to find her.

Imagine a life where the authorities run everything, even the way you think, the books you can (or mostly can’t) read and even the job you should do.

This is the life of seventeen year old Frank Palp, whose awful high school days are nearing completion and who dreams of being a writer. Unfortunately it looks like a good job in ‘the ministry’ might be his path, after all that is where his war hero father and older sister work - really it’s where most people work.

Frank has an obsessive love for a girl from school, Olivia, and when he finally receives her love in return and a promotion at ‘the ministry’ to work for Mr Vertex uncovering subversive people, his life should be perfect.

Unfortunately, he uncovers many disturbing truths and realises that real action needs to take place for change to occur. He also discovers many things were actually right under his nose.

This is a thrilling anti-establishment novel that will suit readers 14+.