Amari and the Night Brothers 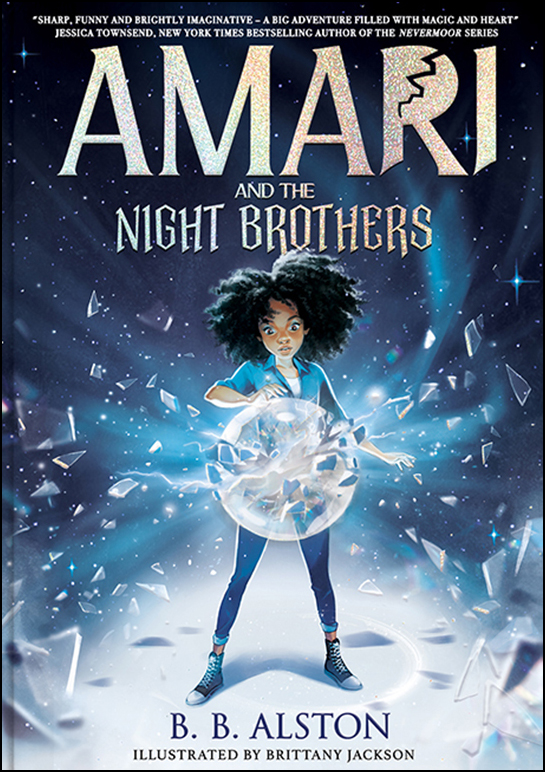 A 12-year-old girl from the housing projects discovers her brother was more than he seemed… And so is she. A gripping, fun, heartfelt new fantasy for an upper middle-grade audience.

Quinton Peters was the golden boy of the Rosewood City low-income housing projects, receiving full scholarship offers to two different Ivy League schools. When he mysteriously goes missing, his little sister, 12-year-old Amari Peters, can’t understand why it’s not a bigger deal. Why isn’t his story all over the news? And why do the police automatically assume he was into something illegal?

Then Amari discovers a ticking briefcase in her brother’s closet. A briefcase meant for her eyes only. There was far more to Quinton, it seems, than she ever knew. He’s left her a nomination for a summer tryout at the secretive Bureau of Supernatural Affairs. Amari is certain the answer to finding out what happened to him lies somewhere inside – if only she can get her head around the idea of mermaids, dwarfs, aliens and magicians all being real things, something she has to instantly confront when she is given a weredragon as a roommate.

Amari must compete against kids who’ve known about the supernatural world their whole lives and are able to easily answer questions like ‘Which two Great Beasts reside in the Atlantic Ocean?’ and ‘How old is Merlin?’ Just getting around the Bureau is a lesson for Amari, with signs like Department of Hidden Places this way, or is it? If all that wasn’t enough, every Bureau trainee has a talent that is enhanced to supernatural levels to help them do their jobs – but Amari’s talent, when it’s revealed, is illegal. As if she needed something else to make her stand out.

With an evil magician threatening the whole supernatural world, and her own classmates thinking she is an enemy, Amari has never felt more alone. But if she doesn’t pass the three tryouts, she may never find out what happened to Quinton.

The story begins with scholarship student Amari Peters getting expelled from the elite Jefferson Academy. It seems she is nothing compared to her high achieving older brother Quinton, whose photo still holds pride of place at Jefferson. But Quinton went missing over a year ago, and everyone assumes he got mixed up with the wrong people.

But then Amari opens a mysterious briefcase that Quinton sent her and a whole new world opens. She is to spend her summer at camp at the Bureau of Supernatural affairs and soon discovers her amazing, magical powers.

These powers don’t please everyone, but she knows that she has to use everything she has to find her brother - hopefully still alive!

With marvellous characters and an incredible supernatural world, readers will be captivated by Amari’s quest and cheer her on her journey.
It is a brilliantly written story that I could not put down. It has magic, courage, good versus evil and so many amazing creatures and inventions, like talking elevators, that will utterly enthral readers aged 10 and up.