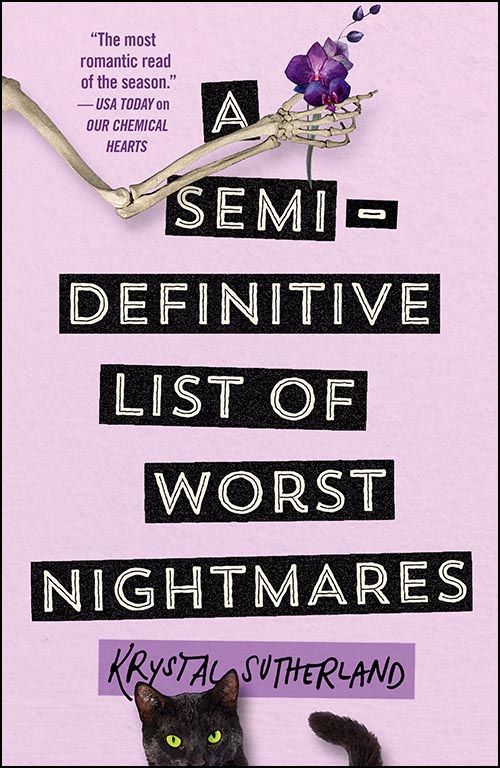 Ever since Esther Solar's grandfather was cursed by Death, everyone in her family has been doomed to suffer one great fear in their lifetime. Esther's father is agoraphobic and hasn't left the basement in six years, her twin brother can't be in the dark without a light on, and her mother is terrified of bad luck.

The Solars are consumed by their fears and, according to the legend of the curse, destined to die from them. Esther doesn't know what her great fear is yet (nor does she want to), a feat achieved by avoiding pretty much everything. Elevators, small spaces and crowds are all off-limits. So are haircuts, spiders, dolls, mirrors and three dozen other phobias she keeps a record of in her semi-definitive list of worst nightmares.

Then Esther is pickpocketed by Jonah Smallwood, an old elementary school classmate. Along with her phone, money and a fruit roll-up she'd been saving, Jonah also steals her list of fears. Despite the theft, Esther and Jonah become friends, and he sets a challenge for them - in an effort to break the curse that has crippled her family, they will meet every Sunday of senior year to work their way through the list, facing one terrifying fear at a time, including one that Esther hadn't counted on - love.

What an amazing book about fears and how, if left alone, they can become all consuming. Based around a wonderfully quirky main character, Esther Solar, her equally unusual family, and her very unique friend.

Esther’s life changes when her primary school love interest Jonah reappears in her life and duly pickpockets her at a bus stop. Together they begin a quest to face Esther's fears head on and this produces truly fantastic results. With a twin brother, Eugene, who is totally afraid of the dark and currently contemplating suicide, a father who hasn't appeared from the basement for six years, a mother who believes in all sorts of curses and has a gambling addiction to boot, and a best friend who chooses not to speak, Esther’s life is pretty complicated.

Clearly, Esther has a kaleidoscope of fears to uncover. But the biggest fear of all is a character that her grandfather has met on a few occasions. His intermittent visits are mentioned throughout the story. He is indeed, the man who would become death, or, if you prefer, The Grim Reaper.

We probably all have our own individual phobias and this book will help many of us to reassess and maybe even choose to confront them! Which is not a bad idea, so I strongly recommend this book to all young adults, probably best suited to those 15 years and older.